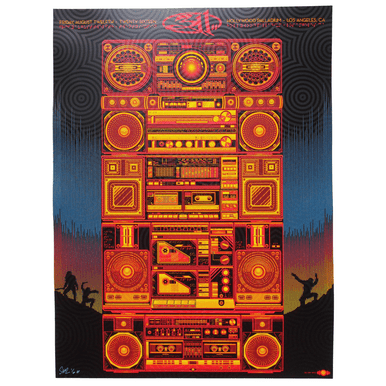 Todd Slater "The band's latest record is titled: "Stereolithic", and I immediately drew a parallel to the monolith from 2001: A Space Odyssey.  I thought if I could make a literal monolith out of stereo equipment and dot the top of the structure with the glowing eye (HAL 9000) from the film, I'd have something really mesmerizing to look at.  It was an idea that took about 1 minute to think of and about 2400 times that to actually create.  Truthfully, it was a lot of fun to make each stack, with every one building upon the next.  My usual work listening is a plethora of podcasts but what I found was that ambient, drone and pulse music complimented the project and helped keep a clear focus throughout.  One final note, I decided to conceal all of the text that would normally appear on the stereo faces, obscuring it to braille..."

This product hasn't received any reviews yet. Be the first to review this product!